Here is my tutorial for the "zolino" which is named after the person who first made it, from a photo someone found at a website.

The example for this tutorial uses nine different colors (for clarity) which I then folded, making 18 working threads. For length (8 to 10 inches finished) you may need to go as high as 100 inches. So use your favorite method of starting then begin. I'm right-handed so I usually start on the left... Apologies for some of the blurry pics, but you get the idea right? repeat step 1 seven times, reducing by one for each row. (do not knot around the last thread, leave it hanging; see picture) Repeat for the right side, making BK instead. (basically a mirror image of the left side) When you've finished these steps you should have a bunch of threads dangling in between these triangular knotted sections. (as seen in the above pic I hope!)

This can be a bit tricky but simply join each color thread with each other via a FK (or BK whichever you prefer), white with white, blue with blue etc.. A single column of vertical knots should result. Don't connect the 2 black strings together. Now turning the work sideways will most likely help with this next section, because you'll be basically repeating the above beginning steps. Just at a 90 degree angle... So you don't have to turn it, but it might be easier, whatever works for you!

So now repeat Step 1 through 3. But note you will have to turn your work the other way to knot it. When you finish Step 5 it is at this point you should repeat the steps from the beginning.

The pattern just repeats from this point! Don't connect any strings. Just repeat! I'll explain here how I made this zolino with the use of a normal pattern. The way of knotting is exactly like explained above, only the pattern is different. 1.
To make a zolino you need knotted squares.
Each square is build out of 2, 4 or 8 triangles. The following explanation uses 8 triangles with the same pattern.

* this tutorial is all just one example. You can knot any pattern you like, as long as it fits the string-order and colors you have. Not every triangle has to be the same. I just like the mirroring-effect ;-)

2.
This is how the first square looks like as a pattern.

3.
This is the pattern-triangle I used for my zolino.
See image B below: It goes from row 16 on the left-side, diagonally down to row 26 on the right-side of the original pattern. And it ends at that row 26.
*You can use a triangle out of any normal pattern. I used #74891.
*I added border-strings to my zolino. You don't have to do that, it makes the borders a little smoother, which I like myself.

The diagonal line, row 16-26, is the order of the strings for starting the bracelet.

4.
To make the big square you need to mirror the small triangle over and over again.
At every red arrow/red line the triangle is mirrored.
*See also pictures below to see how the square is build out of one triangle. 1-2.
The image nr. 1 is the string-order for starting the first square. At the end of that square the string-order will be like image 2, upside down.
That means you need to find another triangle in your pattern for the next square.
That triangle is at the other side of the diagonal line (row 16-26) in the original pattern, see picture.

Building of the next square: take the new triangle; 2 on top (mirrored), add two under these (again mirrored). Mirror the whole top to get the bottom.

The first and second squares will repeat: nr. 3 will be the same as nr. 1. Unless you make a new design with the string-orders you end up with ofcourse ;-))

And now to the actual knotting: 1.
String-order before starting.
Take your strings about as long as doubled strings for a normal bracelet: about 250 cm.
Start knotting in the middle of the strings.

2.
Border-strings added: the first and the last black string. The last one will be in the middle of the first square, but on the outside of the second square. That's why you need them on both sides if you want smooth edges.

3-4
To start with a loop you need to take apart a few strings, and use one of these to put some larksheadknots around the others:
Leave out the top of the pattern and use the strings that come from above, in this case the first black border-string, one dark-green and one orange.
If you don't want a loop, you can use the same strings for making a braid. In that case: take for these colors two separate shorter strings, instead of one long string.


6.
Now we can start knotting the actual pattern, the triangle.
First row :Orange and dark green onto light green.
See pattern: this is the diagonal line that starts at row 20, and goes up. (Picture A ,nr 3, see above.)

8.
After this row you need to start the mirroring!

-Proceed the knotting, mirror the triangle you just finished.
-Knot the right-side the same as the left-side, but again mirrored.

Keep knotting the little triangle mirrored till the square is finished. Start knotting the next square like the instructions for the regular zolino. 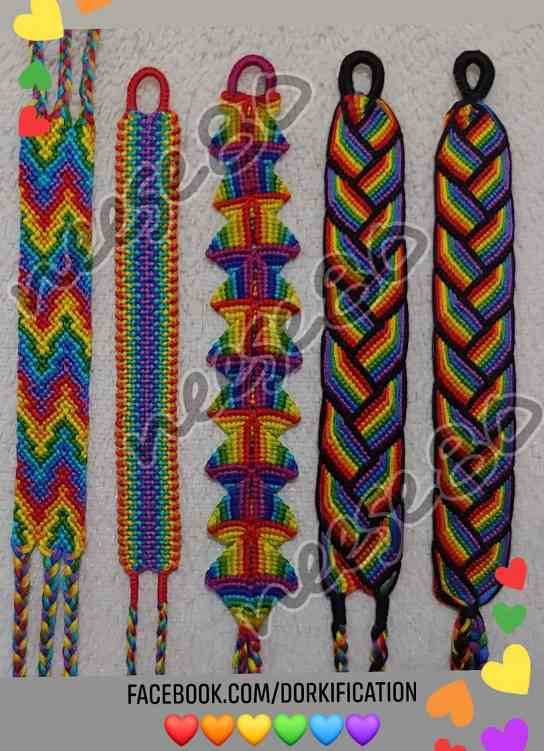 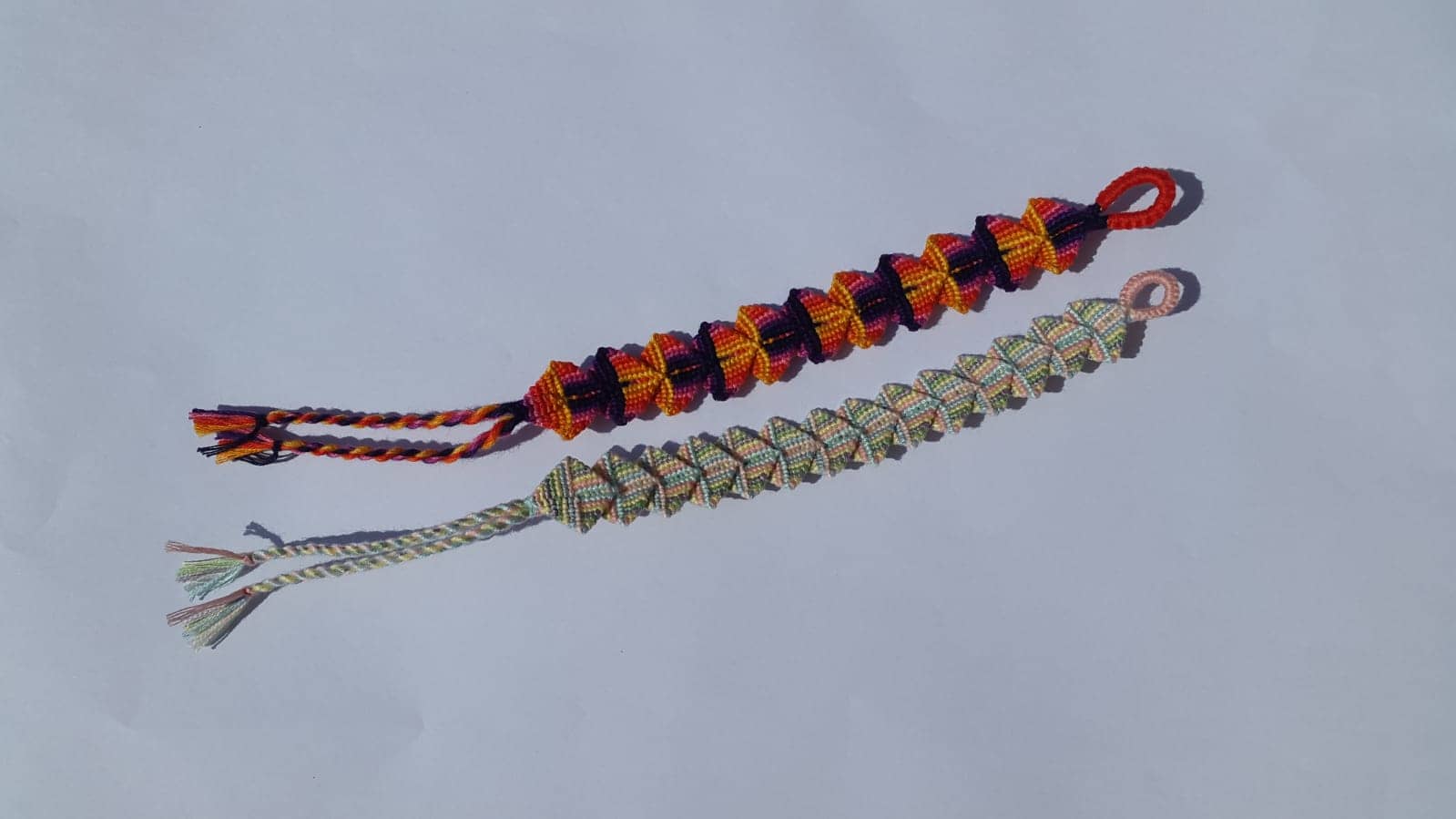 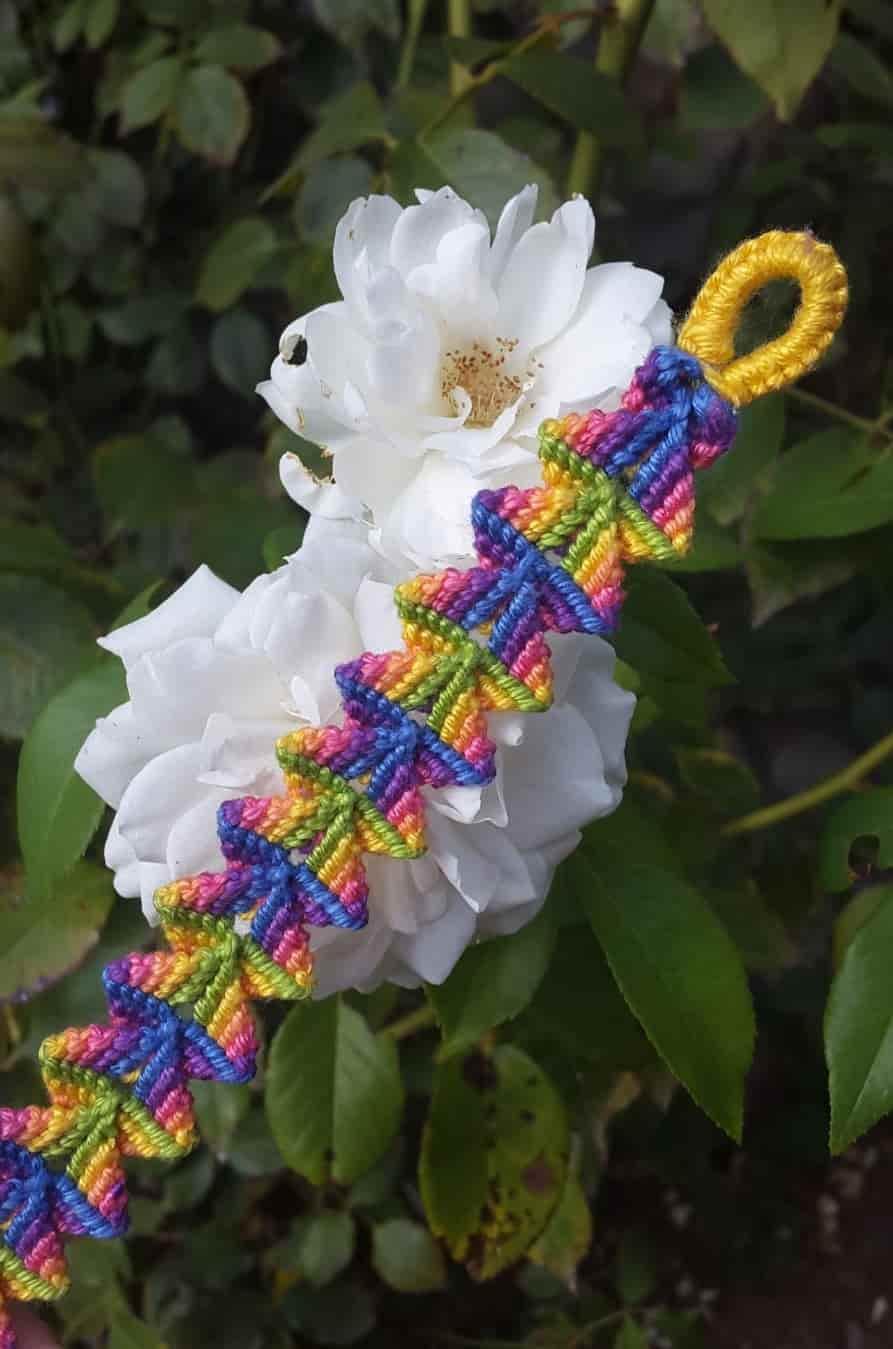