Pattern used: #68074
I've added one extra string to the borders for this pendant. How to start the pendant


The pendant starts out just like the bottom of the square macrame box Follow said tutorial for the 'box with pattern' up to step 9.

Turning the square into a pendant: This is the first square.

Knot a string all around the square. Glue the ends to the back.

Now you can start the knotting of the backside. If you start with knotting the strings on top of the corners together, you can put a short string around them to be able to secure the pendant to a clipboard while knotting.
* You can also put these strings in one corner through a keychain-ring if you like the pendant to become a keychain.

You can now use the pattern again to knot the backside, from the corners down to the middle. The pattern is the same as on the front side, but mirrored.

Knot till you have a little square. Proceed in the next corner. When you've finished all 4 little squares you can close the backside by knotting the strings two by two together. Don't knot the most middle strings together yet.

After knotting all 4 sides you can cut all of the string-ends, but the middle strings. Be careful to not cut the last knotted strings too short.

Put glue on the string-ends. You can first glue, than fold the ends of the last knotted strings over it and push everything flat.

Knot the last strings together. Take a needle and put the strings through the pendant. You can cut them after that.

If you follow the above, up to step 5, you can also knot the backside a little bit different to be able to finish the pendant different:

Knot 3 of the little squares, instead of all 4.

The last square starts in the middle instead of on the outside, just like the frontside of the pendant. You need to close the gaps between the first 3 squares first, and cut and glue the string-ends involved.

You now have strings hanging under the pendant. You can finish it with larkshead knots on the outside, every next knot two strings more included inside the knot, one from the frontside and one from the backside of the pendant.

With a few beads on it it'll become a nice tassel. Like this:


- Start the pendant with 5, instead of 4 parts. That's the only difference!


- Don't knot the corners of the first square/frontside of the pendant. You'll probably want to use a wider pattern to make an octagon instead of a square.

I'm sure there are other variations possible. Like using an alpha pattern instead of a normal pattern. 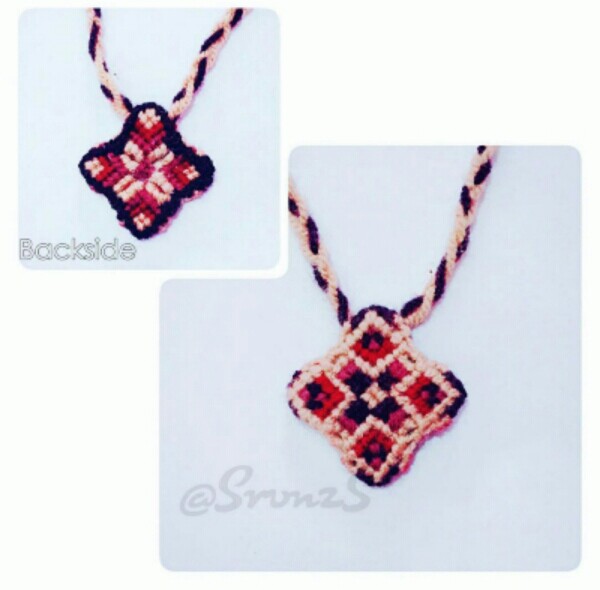 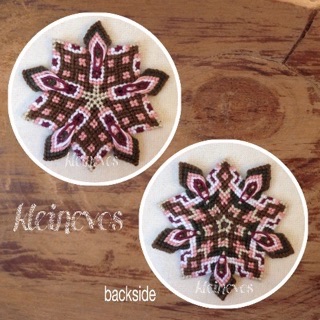 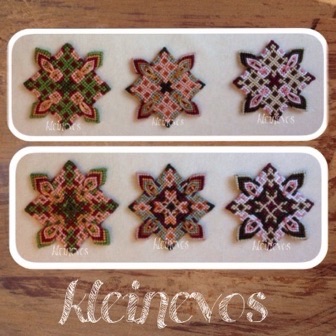