For those of you who learn easier with grids here is a diagram:

Note: This diagram assumes that the NEXT large diamond/circle will be blue.

For this bracelet you are going to need six colors, some people use eight but in this tutorial. You need two of each color.
First, cut your strings, tie them together, and separate them into two groups. (One strand of each color per group). 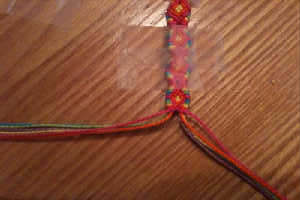 Starting on the left side, pick your first color and tie a forward knot around all the other threads in that group. (5 threads) *Make sure to always tie double knots! 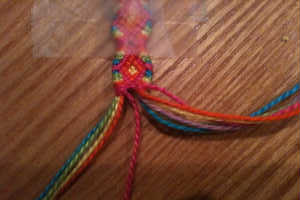 Pick up the color you want to use next and tie a forward knot over all the other threads in that group EXCEPT the one you just used. (4 threads)

Continue doing this until you run out of colors... the last color is only knotted on and will not be used to make a knot

Do exactly the same thing with the right group of threads except this time you will be doing backwards knots. it should look reverse of the other side. 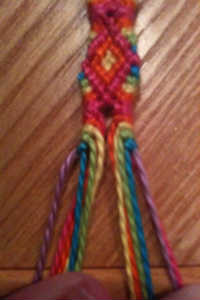 The sides are now done, time to work with the middle. take the two inner most threads (should be the same color) and join them with a forward knot.

Going down the right side, make forward knots with all the threads and on the last one make a forward backward knot.

Do the same thing on the left side except you will be doing backwards knots with all the threads and on the last one do a backwards forward knot. 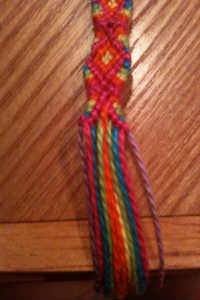 Take the next two colors in the middle and do a forward knot to join them.

You will do the same thing as you just did with the first thread in steps six and seven except make the forward backward or backward forward on the thread right BEFORE the one you just used. 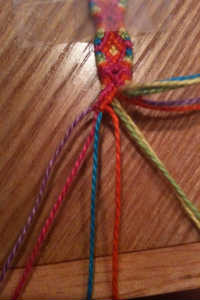 Do the same with the next color in steps 8 and 9.

Take the two inner most threads and knot them together with a forward knot. should be the same colors and the same threads used in step 10. 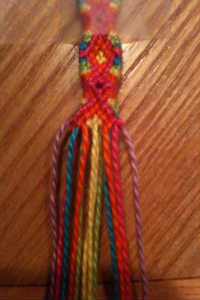 Do the same in step 12 with the second outermost right and left thread. 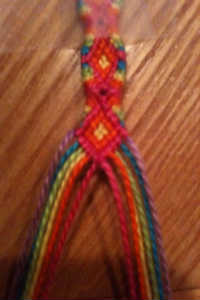 Now we move back to shaping the outside of the bracelet. on the right side pick up the second color from the right and make a forward knot over the right most color. 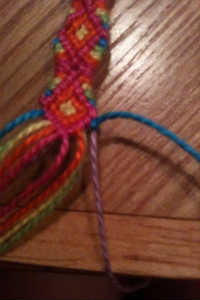 Now pick up the third color from the right and make a forward knot over BOTH the first and second to the right colors.

Continue doing that with all the colors in the right group. (kind of like in the beginning but opposite)

Do the same thing on the left side except doing backwards knots.

If you want to keep all the circles the same color, then don't pay attention to this step. to make the colors different, just pick a different color to start with when you do it again. 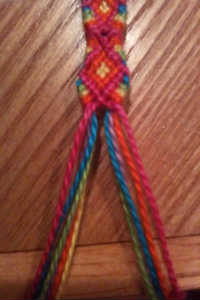 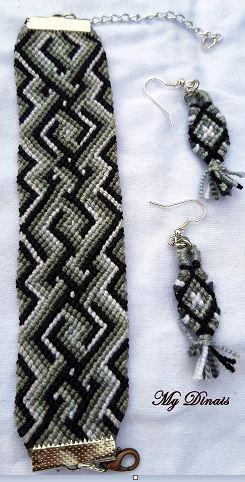 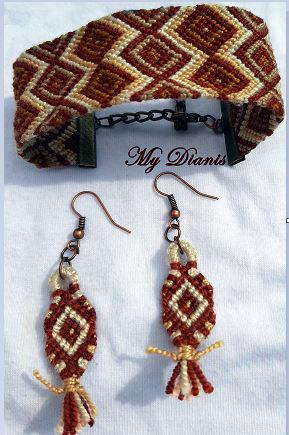 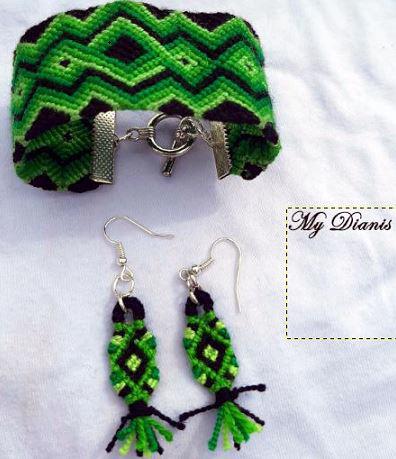