The pictures for this tutorial were gone, that's why new pictures have been added. I left the original text though, because it starts out with separate strings instead of folded strings. That's also why you don't need any glue if you follow the new pictures :-)

-Make one "circle", (I use 7 colours,but it is up to you how many colours you choose) but instead of starting another circle, take colour of biggest square and make knot over all the strings. In my case it will be dark blue.

Make sure your strings are long enough on both sides. You need to make a knot on the other side, too.

-Take piece of wire or a headpin (eyepin) if you have one, earring hooks and beads.
Put the eyepin(wire) through the earring.( =>In the pictures below you add the metal ring before you start knotting the circle.)

-Using pliers with a thin, round end, make a loop at the end of the eyepin... don't make the loop too tight or too loose. It should be able to move a bit.
you can use pliers with a flat end to push it a bit.

I like to put litle beads on eyepin, but it's not necessary.

-Now make one more loop on the other end of the eyepin. If it's too long, you can cut it shorter.

-Add a hook and close the loop.

-Now take some universal glue.
It doesn't really matter what glue you use. Just make sure it is transparent.

-Put a litle bit of glue on the side where the hook is, so the knot won't fall apart after cutting the strings of.

-You can use toothpick to spread glue, so it will get everywhere.

-Now hang the earring somewhere and let the glue dry off.

-Now take earring and cut off the strings on the side where the hook is. Try to cut them as close to the knots as possible. If you used enough of glue, it won't fall apart. :)

-Now put glue on the top. Don't conserve the glue. You don't want your earring to fall apart.

-You can again use the toothpick.
Now the glue needs to dry off, so hang it somewhere again. :)

-Start out with two sets of strings, one set for each earring. I made keychains instead of earrings, but the way you make them is the same.
- Take one or two of the strings: the string that makes the first knots and another one. Make a few larkshead-knots with one of them around the second string.
-Put these two strings through the metal ring

-Start knotting the circle like in the shaped bracelet-circle tutorial. I'm not too good in making the edges smooth with F- and B-knots as you can see in the pictures. I like using BF- and FB-knots instead, see picture 10.

-Make a short piece of chinese staircase around all of the strings, upside down, and put the end of the string back through the staircase-part with a needle. -Use the rest of the strings to make the second earring.


If you followed these steps, you should have now something like this, to the left the one with F- and B-knots, to the right the one with BF-knots and FB-knots on the edges. For making other designs than just a square, see shaped bracelets with patterns or take a square out of any normal pattern. 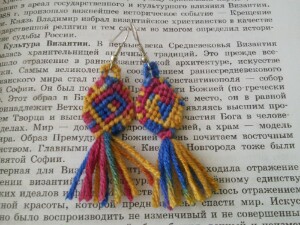 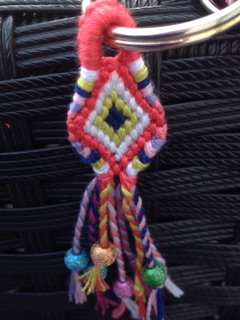