You'll need:
- yarn/floss
- tape (to tape it to a table or flat surface while knotting)
- scissors, sewing thread, and a needle

Then choose a pattern:

Note: If you decide to use a rug as your pattern then you can simply cut the fringe long. You can later square knot the fringe together to create the sides.

Tape down the outermost threads of the pattern (purple), and fasten all the other threads onto that thread using lark's head knots.

Add all the threads according to the pattern.

Note that the purple thread we used as a base is also involved in the pattern, so there are no loose threads left over.

Continue knotting until it's the length you want.

Group together several threads and make tight overhand knots. Then cut the threads, creating cute little tassles for the flap of the bag.

This is the inside/reverse of the pattern.

Fold up the top part, creating a baggie, and leaving enough over the create a flap for the cover.

Sew up the sides.

This is what it looks like with the flap open.

Sew the strap onto the sides of the bag.

Fold down the front flap, and your bag is done!

In case you want to make a bag that's not flat like the one above, you can add strings: Adding the strings with larkshead-knots: I made the front/back-part with extra border-strings to get a border where I can easily find where to knot strings onto.
The borders are all fb- or bf-knots, with a core-string inside for extra stability.

-One of the strings that's inside these larkshead-knots is a base-string again btw, not used for making knots, just for extra stability inside the outer knots of the small sides of the bag. You can leave them out if that's easier :-) Every time the outer-strings are used, they first make a knot onto the front/back of the bag/purse, all fb- or bf-knots again. 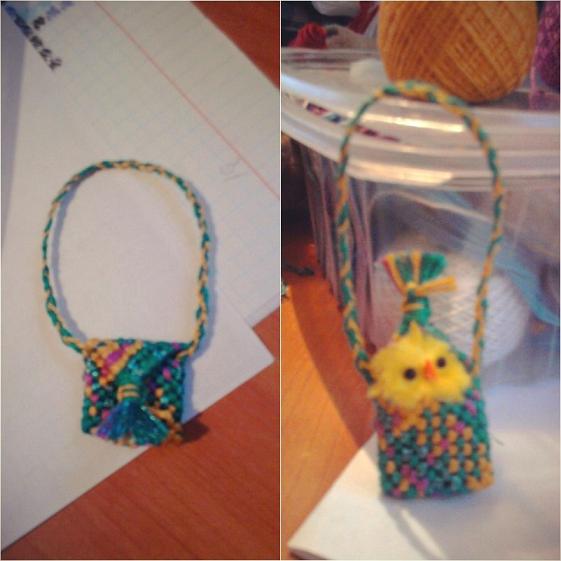 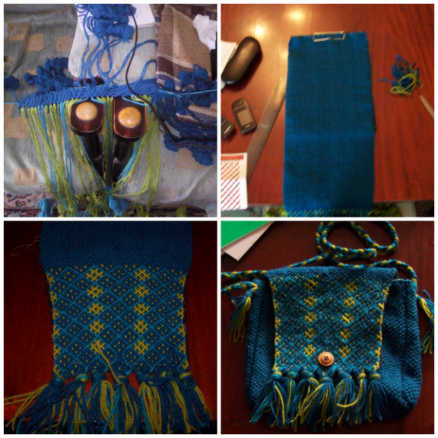