There are two things to get a bracelet finished earlier:
- knot more often
- knot faster.

For knotting faster it helps if you don't do one knot, put both strings away and pick up the next two strings to make the next knot in the horizontal row, but if you knot by segment (diagonally). More often than not you only have to search for the one next string that way, not two, and it's easier to memorize the pattern if you don't see it as single knots but a structure of single pieces which interlock.
And if you memorize the pattern after a short time you don't have to look at your pattern sheet that often which saves some time, a look at your already finished part of the bracelet might be enough, and even if you still have to look at the sheet it helps to find the right place to look at if you remember that you just did five fk with green at the right side of the bracelet - five green knots should be easy to locate.

Knotting by segment needs some practice though. If you are one of the knotters who go by horizontal row it might be even slower in the beginning. But trust me, it's really faster.
I usually do a twelve string bracelet in way less than 2 hours, I made five wide Celtic style bracelets with 32-50 strings in about a week. But if I am forced to go by horizontal row (with tartan patterns for example) I need a lot more time.

One of the easier patterns to start would be pattern #118

as it is only a little more than a basic candystripe pattern.

First we have a look at it to analyze how it works.


So we want to make sure that you really can do as much of these knots, one after another.

The colors also go from left to right, but there's a single white bk every few rows. This means we can't just take the colors and make a stripe all the way down, but have to take care where the "white dots" have to be.

A lot of people (most I know at least) have learned to make candystripes by taking the outer left string and making fk to the outer right, then grab the new outer left string to make fk to the far right. This will produce a diagonal beginning, not a horizontal one, so the "triangle" that's missing in the top right has to be filled first. And this is what we are going to do now.

So when we want to knot that pattern segment by segment I'd start at , make the first blue FK, then do the white "stripe" (3FK), then (two light blue FK), (the white "dot"), (another two light blue FK) and so on. This "triangle" you knot from right to left will be the base for any further "stripes" you want to knot. 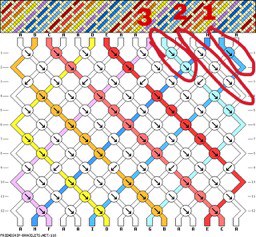 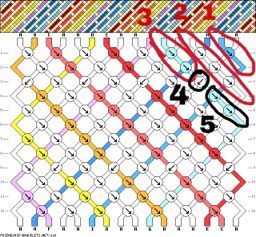 When you do that you have to remember one thing again: the pattern is not just 12 rows long. Your bracelet will most likely be around 120 rows in the end (that's how long mine are at least). So it would be stupid to stop this after 12 rows like shown in the pattern picture.


There's also a clear scheme visible where the white "dots" have to be: after five colored knots there's one white dot. And the dots are all in one horizontal row which is easy to remember. 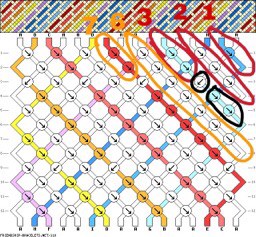 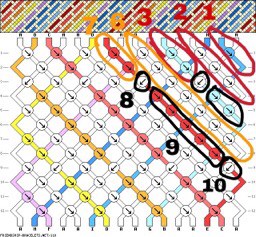 It will really save a lot of time knotting the pattern this way as you can do up to 15 knots in a row without putting the string aside, you only have to search for the second string, but that's easy to pick.

So that has been a basic pattern to show, without really any interlocking. The next one will be only a little more complicated.

Next one is pattern #1661.
I've repeated it several times to make the pattern more obvious.
It only has 8 strings, in segments which are interlocking: 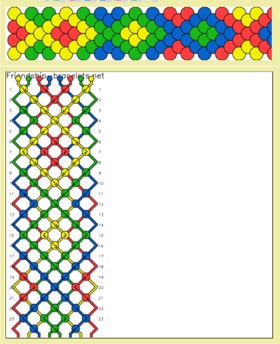 You need to finish one segment or one part first before you can do the next - this is what I mean with interlocking.


The pattern is made out of several basic "pieces",
-Small diamonds -
-Chevrons and big diamonds, which can also be seen as a "fish" filled with a small diamond-
-Triangles- 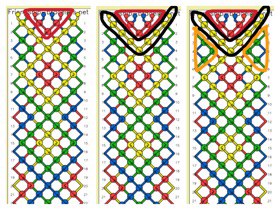 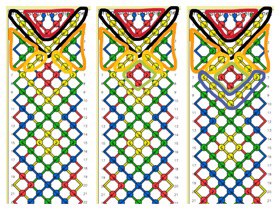 These images show the segments and the order in which they have to be knotted.


You have to start with the red segment , it's basically the rest of a big diamond.
After that first triangle you start with the rest of the pattern, the chevron (black) . After finishing this chevron you have the base to do both side triangles (orange) . And once you've finished these you can do the beginning of the big diamond (yellow) . Knot the small diamond (green) after that, then finish the big diamond (blue) . Then you can proceed with 2 again: another chevron. From there, the pattern repeats in other colors.


There's no 'one right way' in segment knotting though! Whatever is comfortable for you is fine. The main thing is to always look for the most knots of one color in a diagonal line, so that you can knot without having to switch strings too much.
Remember to always knot in diagonals instead of horizontal rows. It will take time to get used to, but it's worth the effort!

Watch a video tutorial on the topic:

The original author of this tutorial is Sareana but it was also edited by Rissa, Kestrel, Ruby9, kleinevos and Masha_Knots. 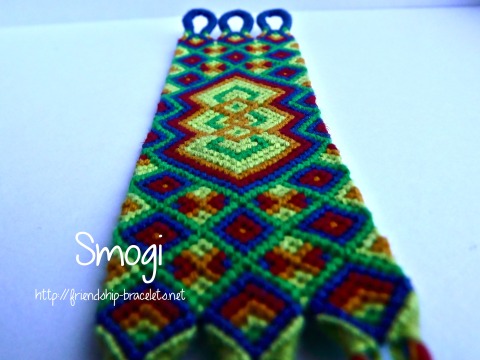 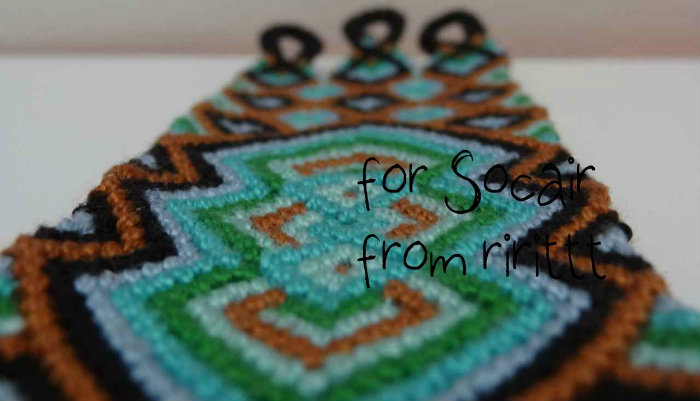